This description is written in the style of Lakepalmer's Games I Am Aren't Playing.
The inhabitants of coloured crate land have a bit of a problem. It's those pesky ghost tanks, you see. They magically fall from the sky at an alarming rate to collapse pile after pile of painstakingly stacked pallets with brightly coloured beanbags. The inhabitants, who spent all day constructing them, are tired of their hard work being ruined by these supernatural deviants, and worse still, they are being driven to madness (and often blindness) by the tanks' incessant flicker. For the sake of their mental and physical health, you have been charged with the task of destroying these pests once and for all.
Requisitioning a tank (or is it a block of cheese on wheels?) from the local military history museum, you load up your Ghostbuster phantom destructor thingy and make your way through the streets and across the village green, trapping those ghouls in miniature balls along the way. Actually, I think that was stolen from Pokemon or something. But the fact remains, you must rid this town of each and every one of those phantom fools before the local health service is overrun. 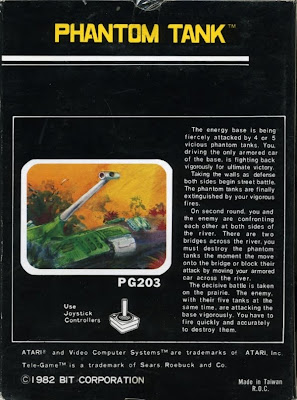 Nah, I made that up. *This* is the actual story (as seen in the image to the right):

"The energy base is being attacked by 4 or 5 vicious phantom tanks. You, driving the only armored car in the base, is fighting back vigorously for ultimate victory.
"Taking the walls as defense both sides begin street battle. The phantom tanks are finally extinguished by your vigorous fires.
"On second round, you and the enemy are confronting each other at both sides of the river. There are two bridges across the river, you must destroy the phantom tanks the moment the move onto the bridge or block their attack by moving your armored car across the river.
"The decisive battle is taken on the prairie. The enemy, with their five tanks at the same time, are attacking the base vigorously. You have to fire quickly and accurately to destroy them."

I shouldn't have bothered writing my own made up story because the real one is much better. I do so love a good bit of Engrish!
2 comments: