Introducing Guerrilla Reviews, a (perhaps) new series of lo-tech point-the-camera-at-the-TV style vids in the same vein as Collie's Inept Reviews. In this particular video, I play Streets of Rage on the Mega Drive for the very first time. Don't expect too much - the quality isn't that great, but watching it back, I found the narration was pretty funny, so here it is in all its crummy glory.

Presenting the wizard of the dribble:

This is another one of those 'play the game for a bit then narrate over the top of it' style videos, edited down from about 20 minutes to contain the most relevant bits. Seems there isn't an awful lot of love for this game on YouTube, but I am certain the devotees will soon emerge from the cupboard, as there is no doubting Premier Manager for the Mega Drive is a cult classic.

This is the '97 version, as reviewed briefly in an earlier post. 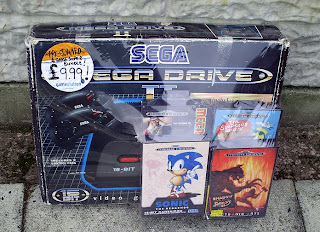 I popped into my local Gamestation yesterday to see if I could grab myself some bargains, but was in for a bit of a shock. There were a couple of games in particular that were selling for waaay more than anything else in the retro games section - Phantasy Star II & III. I am aware of this series, though I didn't know that the games were so rare that shops would slap a price tag of £25 on them over 20 years after their original release.

Still, at least this shop actually had Mega Drive game carts. I spent a large part of Sunday morning looking through second hand game shops in Bolton, to no avail. I did find a PGA European Tour cart at the bottom of a box in a charity shop, but guess what? I already have that. Maybe I should've picked it up for a quid anyway.

Apart from the Phantasy Star 'revelation', there were one or two good deals in the Wigan Gamestation. I picked up a Mega Drive II with two controllers, Mega Games II, Sonic, Bart vs. the Space Mutants and Shadow of the Beast II for ten quid (pictured above). I've done a video about this in which I brag about how good it is - you might see that at some point in the next few days, so watch out.

I also got a copy of PC Brian Lara Cricket 2005 for the bargain price of 98 pence. Hmm, I wonder if that's a clue as to whether this game sucks? Anyhow, I now own the original BLC, Lara 96, Lara 99 and now BLC05 so that sounds a bit like a series review doesn't it? Don't hold your breath...

Currently uploading to YouTube is a new guerrilla review, but don't get your hopes up too much. The quality isn't that great, but I found the commentary quite funny. The game is Streets of Rage on the Mega Drive, which surprisingly I hadn't ever played up until yesterday evening.

The image in Friday's post is a bit of a clue as to what the heck I've been doing over the weekend. Aside from witnessing another crushing defeat for Wigan Athletic against Arsenal, I've once again dug out my old copy (copies) of Premier Manager on the Mega Drive for another look. Things can only get better from here, eh? 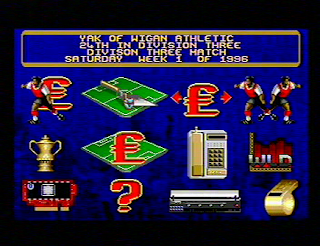 For the uninitiated, the Premier Manager series started back in the early 90s on the PC, Atari and a few other consoles. When it was ported to the Mega Drive in 1995, it spelled a whole load of wasted weekends for console management fanatics, not least myself: I never had a PC back then, so this was my first experience of footy management games.

Firstly, I was extremely surprised to see a video game with English football teams. Back then, my whole game library consisted of American and Japanese video games like John Madden, Sonic the Hedgehog and EA Hockey. Course, Premier Manager wasn't the first console game to use the English leagues - Striker had done that a whole three years before (albeit with hilariously named player parodies) and I daresay a few other carts bore the Premier League licence prior to '95. But to me, this made the game massively attractive. The prospect of taking my beloved Wigan Athletic from Third Division no-hopers -- as they were at the time -- from the pits of despair to the top of the table was too tempting an opportunity to pass up.

Fifteen years later and how times have changed. My goal of getting the Latics to the Premiership had actually been achieved in real life, without the aid of a computer game. Or maybe so, I dunno if Wigan's chairman Dave Whelan is a closet Champ Manager fan or something. 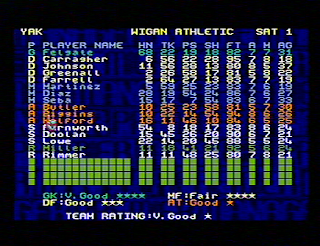 Somewhere along the line I managed to obtain a copy of the 1997 version of the game. It isn't all that dissimilar to the original - only a few minor graphical and technical tweaks and a new soundtrack differentiate this from the 1995 release.

Most importantly, however, it's got the all-new 1997 season players such as... well, I won't name them all here, but get ready to be battered by the likes of Paul Peschisolido, Clive Mendonca (awesome player in the game) and Alan Shearer as you work your way up through the leagues. Lemme tell you, this is a verrrry difficult task for even the most hardened of Premier Manager veterans. You literally have to take things one game at a time and get into some of the finer points of the game if you want to be really successful - something that'll take a long while to master. Aside from squad shuffling, there's hiring and firing of staff, promotion of youth players, training, injuries and dabbling in the transfer market should you so choose.

A Mega Drive nut? If statistics and football are your type of thing, then Premier Manager is the game for you. I know that's a pretty small margin to fall within, but I'm sure you lot are out there!

Such is my level of fanaticism for this game that I recently purchased a second copy. I wanted to start a new saved game without wiping my old one, in which I'd managed to steer the mighty Latics to the toppermost division of the English leagues. As it happened, some other bloke named Ste had also done this on the saved game of my newest copy - much better than me in fact. Blast, and I thought I was the PM champ! Check out my commentary (video below) for some more info on this. 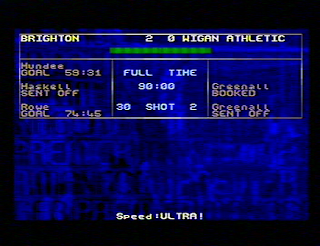 Get if: You liked any of the earlier versions or want a footy management game for a fourth generation console. As far as I can see, there aren't really any others.

Avoid if: You don't like football, stats or games where you have little control over the immediate action.

An interesting one this. When I bought this game about eight years ago, I played it a couple of times and never touched it again, until the other week. From what I could recall, I remember the presentation being absolutely awesome - better even than FIFA. Well, it isn't that good, but anyway, watch the video to find out.


See if you can spot:

Retro Yakkage now has a channel on Blip.tv. The advantage of this over YouTube will be the quality of video, which I will reserve for Blip. I'm in the process of uploading the better reviews (the video reviews) to the channel, so check back in the next few days to see the vids in superb(ish) quality. At least, that's the plan. Hopefully this will go better than the Stage6 experiment...

Anyway, this may or may not comprise other retro-related stuff, we'll have to wait and see.

Additionally, I have a new review ready to export and upload. That may take a while, but be patient and ye shall have a brand new video review within a few days. Wahey!
No comments:

This is a review from some time earlier this year. Due to my poor Internet connection, I never got the time to upload it (this 80Mb video would have taken the best part of six hours), plus I was considering the possibility of making a Mega Games I (Super Hang On, Italia '90 and Columns) 3-in-1 review. That plan was ditched, though you may see reviews of those other games at some point in the future.

I'm not really sure how to describe this one. It started out life as two separate projects based on the same footage: an explosions video and a commentary type thing. You may see both of these at some point -- I am considering creating a blip.tv account for those longer, let's play style vids -- but for now, make do with a cut down, twelve minute edit that condenses all the best bits for viewing on YouTube.

I suppose it could be termed a commentary come review, make of it what you will. One thing's for certain, there's an awful lot of carnage going on.